A baseball-loving 10-year-old needs his jaw screwed in by a quarter of an inch every morning to help him breathe and speak properly.

Brycen Wright, from Peoria, Illinois, was diagnosed with Goldenhar syndrome shortly after birth because of his underdeveloped right ear and right side of his jaw.

A couple of years ago the smaller side of the jaw then stopped growing, prompting doctors to send him for surgery.

He now has a device fitted — termed a jaw distractor — that mother Briana, 30, winds forward every morning.

It forces apart a section of the right jaw that was separated during surgery, triggering bone growth to fill in the gap.

Brycen is not hurt by the device, his mother said, but it needs to be wound forward every morning for the next 13 weeks forcing him to take time off school.

A bigger jawbone will help to relieve his sleep apnea — where he stops breathing while alseep — because the extra space for the tongue stops it blocking the airways.

It will also help him eat and speak better.

Goldenhar syndrome is a rare condition affecting one in 3,500 to 25,000 newborns where part of the skull, spine or some organs do not develop properly.

There is no known cause, although doctors suggest it may be linked to restricted growth in the womb or genetics. 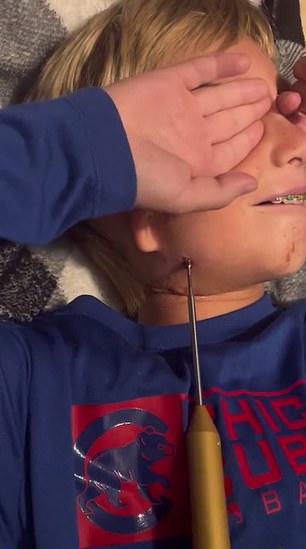 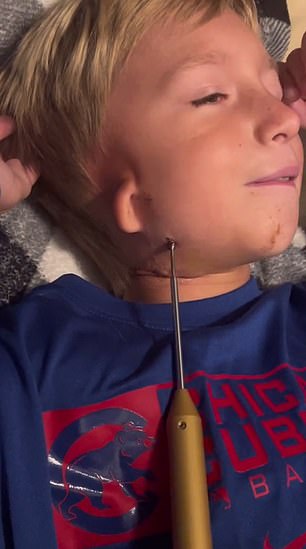 Brycen Wright, 10, was diagnosed with Goldenhar syndrome shortly after birth because of his underdeveloped ear (shown right). But a few years ago his jaw also stopped growing. He has now had a device fitted that his mother must screw forward every morning to help encourage the bone to grow (pictured above) 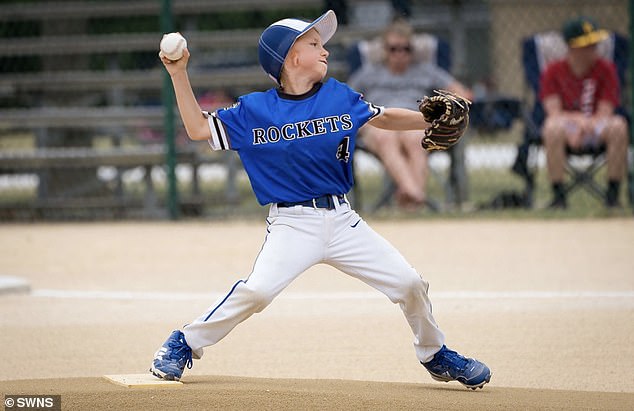 Brycen is a big baseball fan, his mother said, and before surgery regularly played at school 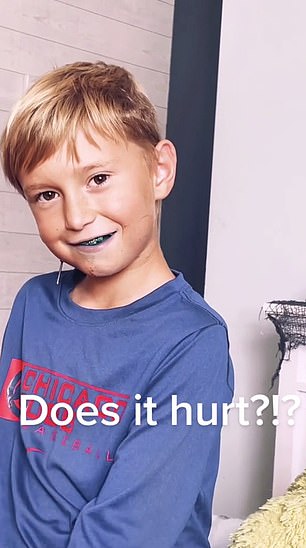 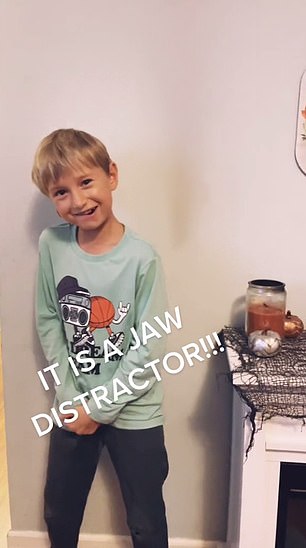 Brycen says that the jaw distractor, which is encouraging the jaw on his right side to grow, doesn’t always hurt. It is medically termed a jaw distractor. In the left photo his mouth is blue because he was living off ice cream, pudding and blue poweraid popsicles at home

Pictured above is a diagram of the device from the Royal Children’s Hospital in Australia. It shows how after making an incision in the mandible the bone is gradually prised apart, encouraging new growth. It is commonly deployed when there is a risk of suffocation

The condition is present at birth and mainly affects the ears, eyes and spine on one or both sides of the face.

Some sufferers will have only a few symptoms such as an underdeveloped ear — medically termed microtia.

But others will have several including spinal problems and growths on the eye.

Patients may experience hearing loss, speech difficulties, or problems breathing due to their condition.

The treatment offered depends on how the condition affects the sufferer, but normally it involves surgery.

WHAT IS GOLDENHAR SYNDROME?

Goldenhar syndrome is present at birth and mainly affects the ears, eyes and spine.

Main symptoms include facial asymmetry, a partially formed or absent ear, spinal abnormalities and noncancerous growths on the eye.

The exact cause is unknown but is linked to problems that occur while the fetus is developing.

Up to two per cent of sufferers have a relative with the condition, which suggests there may be a genetic link.

Brycen was diagnosed with Goldenhar syndrome at about nine months old due to his underdeveloped ear, enlarged kidney and hole in the heart.

He was not found to have any vision or spinal problems.

He initially had surgery to reduce his kidneys and repair the hole in his heart.

The youngster has also had a bone-anchored hearing aid fitted.

But last month he was sent for jaw distraction surgery at the OSF Children’s Hospital of Illinois.

His parents had initially given him pallet expanders, where a device is inserted into the mouth to gradually force it to become wider.

But as his sleep apnea did not improve Briana and his father Adam, 31, eventually agreed to send him for surgery.

In the two to four-hour procedure, doctors cut through the jawbone near the back and attached screws on either side.

These were then attached to a metal device, that sticks out of the side of his face.

His mother must now wind the device with eight turns every morning, to force the two sides of the bone further apart forcing it to start growing.

It will remain in place for 13 weeks and then be removed.

Brycen expects to have another jaw distractor inserted after puberty, once he is fully grown, to further push his jaw to grow.

He has been receiving speech and eating therapy while his jaw grows.

Mother Briana said of her son’s latest surgery: ‘Ultimately, he needed intervention as his sleep apnea was bad and we knew it would only get worse.

‘We wanted to do the surgery in the fall / winter so he would miss the least amount of baseball during his recovery period, they are in off season November to December.

‘Baseball is his life so we didn’t want to take him away from that any more than we have to!’

She added: ‘Over the years doctors have said that the growth of his jaw has been stunted and he’d need surgery — otherwise it would become harder for him to talk and even sleep.

‘It’s easier for your bones to grow and fuse when you’re a child and the healing process is quicker, so we went for it.

‘Every day we have to screw his jaw to move it forward really, really slowly.

‘We’ll do this until December, when it will be removed.’ 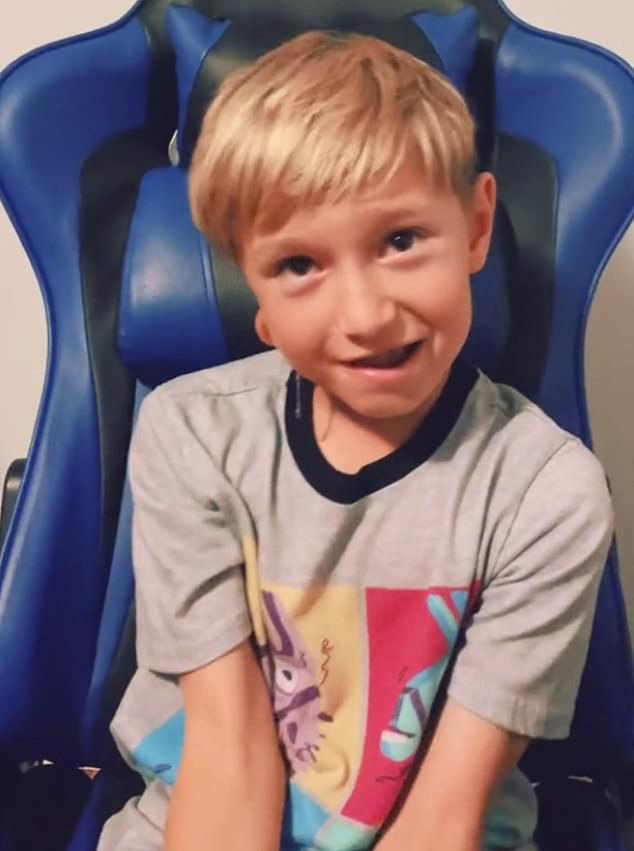 Brycen revealed his condition in several TikTok videos, that have shot to fame online 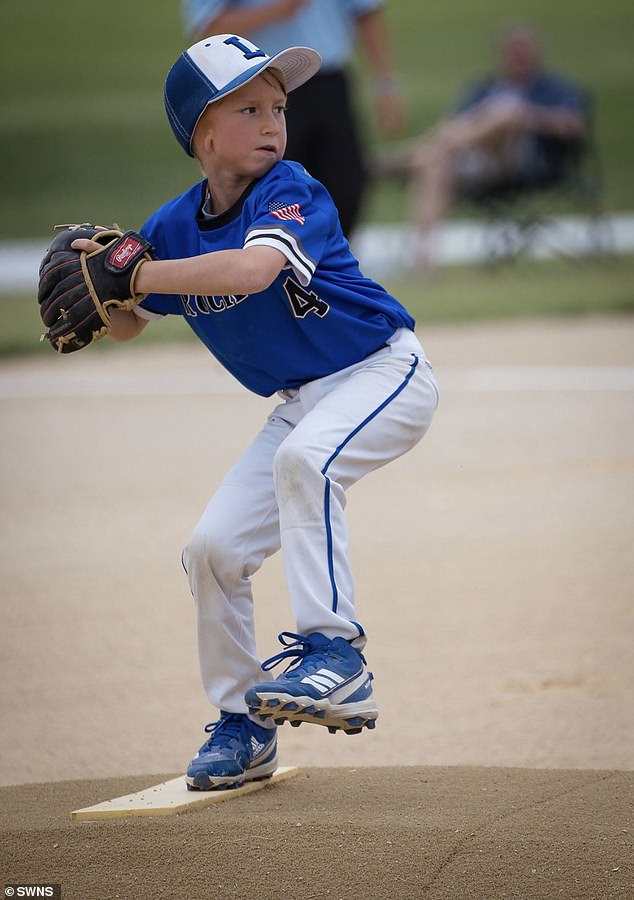 Brycen shown above playing baseball at his school. His mother said he is well-liked by his peers 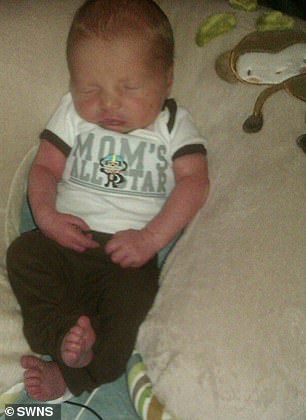 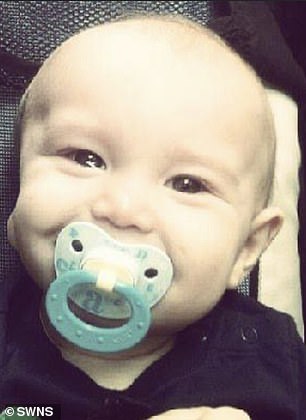 Pictured above is Brycen as a baby. He was diagnosed with goldenhar syndrome at birth due to the underdeveloped ear

The youngster is currently off school due to the surgery, and receiving painkillers to help with it.

Asked by his mother in a video whether it hurts, the boy replies: ‘No!’

He also says he wants to return to school.

His case first shot to fame on social media, after they began to share the story on TikTok.

Briana said her son had initially been posting gaming videos on YouTube, but later asked whether he could start to share about his surgery on TikTok.

The boy’s parents agreed, and Briana said the reaction online has been ‘amazing!’.

‘We had no idea he was going to go viral — we thought that at most, maybe one thousand people or so would see our videos,’ she said.

‘The outpour of sheer love and support has been wonderful. The comments and shares have really boosted his confidence.’

She hopes that by sharing the journey it will help to support others who also have Goldenhar syndrome.

She said: ‘No one is the same. No matter the color of your skin, whether you are handicapable or able-bodied, if your differences are visible or hidden, you deserve respect.

‘People all have something going on in their life, everyone has a struggle – emotional or physical – and everyone deserves acceptance.’