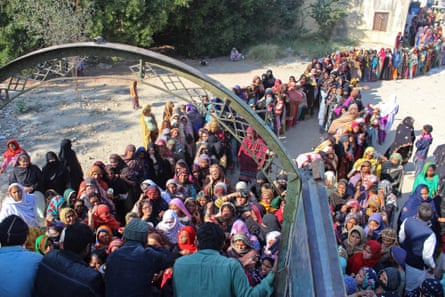 The international community has promised more than $9bn (£7.4bn) to help Pakistan rebuild after last summer’s catastrophic floods, described by UN secretary general António Guterres as a “monsoon on steroids.”

The pledges were made on Monday at the International Conference on Climate Resilient Pakistan in Geneva, Switzerland, hosted by Pakistan’s prime minister Muhammad Shehbaz Sharif and Guterres.

Sharif has said Pakistan needs a minimum of $16.3bn over the next three years to begin recovery and reconstruction, half of which will be met by domestic resources.

Heavy rains which started in June last year and continued until August caused Pakistan’s worst ever flooding, submerging one-third of the country. More than 4 million acres of agricultural land were inundated, resulting in a food crisis and huge financial losses.

Women and children were particularly badly affected. According to Unicef, up to 4 million children are still living near contaminated and stagnant flood waters. The number of children suffering from severe acute malnutrition in flood-affected areas nearly doubled between July and December 2022, compared with the same period in 2021, the charity reported on Monday. It also said that the number of acute respiratory infections among children has soared in flood-stricken areas.

On Monday, Médecins Sans Frontières (MSF) warned that it was seeing alarming health issues in flood-hit areas, with malaria positivity rates running at 50% in Sindh and eastern Balochistan in December, despite the colder season, when malaria infections would be expected to decline.

“We are still in an emergency phase,” said Edward Taylor, MSF’s emergency coordinator in northern Sindh and eastern Balochistan.

Speaking at Monday’s conference, Sharif said the world was standing at a “turning point of history”, adding: “It’s not only a question of how to survive … it’s how to maintain our dignity and honour – by moving forward with a sense of purpose and a sense of achievement.”

Guterres called for help to rebuild Pakistan, declaring: “No country deserves to endure what happened to Pakistan.”

He told the conference that Pakistan is doubly victimised by climate chaos and a morally bankrupt global financial system. “Above all, we need to be honest about the brutal injustice of loss and damage suffered by developing countries because of climate change. If there is any doubt about loss and damage – go to Pakistan.”

Pakistan was hit by the floods at a time while already experiencing an economic crisis, and continues to face financial challenges, resulting in record-level inflation.

Sharif said his government has prepared a comprehensive “4RF” framework, to strive for “recovery, rehabilitation, reconstruction and resilience”. “I want to make this statement categorically. Every penny will be used in a transparent fashion. I have put in place a third-party validation mechanism that every penny is accounted for and invested in the interests of needy people who have been badly affected by these ferocious floods,” he said.