Tougher restrictions banning people from mixing with other households in any setting will be introduced tonight in large parts of north-east England due to a continued sharp rise in coronavirus cases.

Existing measures – for Northumberland, Newcastle, North and South Tyneside, Gateshead, Sunderland and County Durham – are being tightened at the request of local councils because the virus is still spreading, Health Secretary Matt Hancock said.

It had been illegal for two households to mix inside or in a garden, but it was only guidance that they should not meet at public venues, including restaurants and pubs.

These measures are in addition to the recent changes in rules in Northern Ireland Scotland and Wales highlighted below. 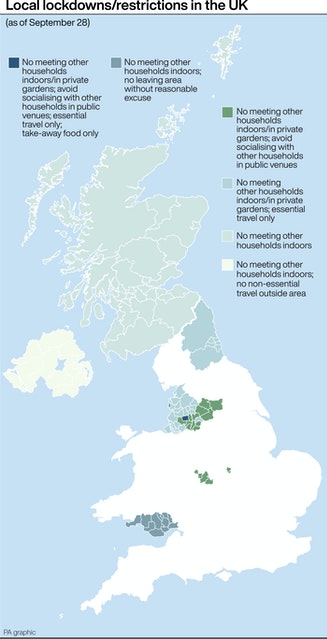 A 10pm curfew is also in place for pubs, bars and restaurants in Scotland, while household mixing indoors is banned, with exemptions for those living alone, couples who do not live together, childcare and tradespeople.

In Northern Ireland, households are not allowed to mix indoors, except for single-person bubbles and certain other exemptions, and no more than six people from two households can meet in private gardens.

Meanwhile, Neath Port Talbot, Torfaen and the Vale of Glamorgan in South Wales went into local lockdown from 6pm on Monday, which means people will not be able to enter or leave these areas without a reasonable excuse.

They will not be able to meet indoors with anyone they do not live with, with extended households suspended.

Are you living in an area that has tougher measures imposed?  How are you feeling at the moment? What are your views?