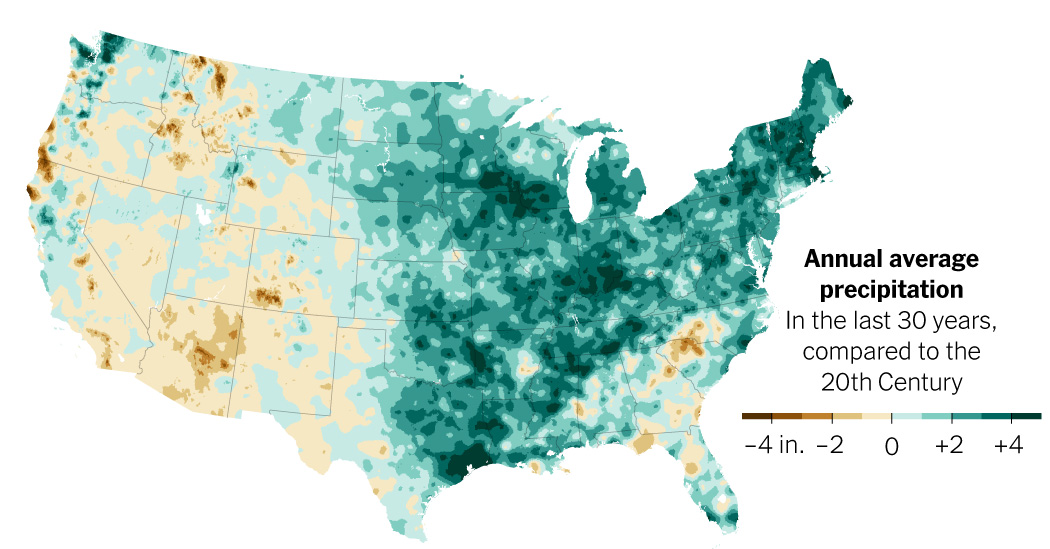 By Aatish Bhatia and Nadja Popovich

The United States, like most of the world, is becoming both drier and wetter. It depends where you live.

In New York City, a tropical storm delivered record-breaking rains this weekend. Heavy downpours caused devastating flash floods in central Tennessee, tearing apart houses and killing more than 20 people. Yet, California and much of the West remained in the most widespread drought in at least two decades, the product of a long-term precipitation shortfall and temperatures that are much hotter than usual.

This divide, a wetter East and a drier West, reflects a broader pattern observed in the United States in recent decades. Similar patterns can be seen worldwide: On average, global land areas have seen more precipitation since 1950. But even as much of the world has become wetter, some regions have become drier.

It’s not yet clear whether these changes are a permanent feature of our warming climate, or whether they reflect long-term weather variability. But they are largely consistent with predictions from climate models, which expect to see more precipitation overall as the world warms, with big regional differences. Broadly: Wet places get wetter and dry places get drier.

You can read our article, and see the full set of maps, here.

The numbers: Air can hold about 7 percent more moisture with every degree Celsius, or 1.8 degrees Fahrenheit, of warming.

Quotable: “Precipitation is one of the key climate variables,” said Aiguo Dai, a professor of atmospheric science. “The direct impacts from a warming temperature are important, but the indirect impact through changes in precipitation and storm intensity will be even bigger.”

How drought is crushing farmers in the West

In May, when I first started writing about the severe drought in the West, I made it a point to check the weekly map produced by the U.S. Drought Monitor. I saw something interesting: While I and many other journalists had been focusing on conditions in California and the Southwest, North Dakota was really dry, too.

So, I went there to see what was going on. With Ben Rasmussen, a photographer, I visited with ranchers in McHenry County, one of the worst-hit areas. Grazing lands were brown and stubby. Corn being grown as feed barely reached my ankles. Water holes were drying up.

All that was forcing many ranchers to sell off parts of their herds — which Ben and I witnessed at a livestock auction near Bismarck, where a steady stream of ranchers arrived with trailers full of cattle to sell. You can read the full article, and see Ben’s great photos, here.

The forecast: The Western drought will last into fall or longer, according to the National Oceanic and Atmospheric Administration.

Quotable: “I’ve been ranching for 47 years and then this year had to come along,” said John Marshall, who runs a ranch in McHenry County with his son, Lane.

Global warming increased the likelihood of the downpours that led to flooding in Germany and Belgium this summer and also made the storms wetter, scientists have found.

The researchers said the record rainfall was 1.2 to 9 times more likely now than it would have been more than a century ago, before emissions of heat-trapping gases warmed the world by more than 1 degree Celsius, or about 2 degrees Fahrenheit.

Looking ahead: If the world warms to 2 degrees Celsius, as is likely without drastic cuts in emissions, the probability of such a weather event would increase even more, becoming 1.2 to 1.4 times more likely than they are currently.

And the Tennessee floods? Researchers haven’t had time to analyze the links between the weekend flooding and climate change, but one scientist said the heavy rain was “exactly the type of event we expect to see with increasing frequency in a warming climate.”

From Opinion: ‘We will not allow the world to look away’

In Her Words: Climate change is worse for women

The Times’s newsletter on women, gender and society spoke to Katharine K. Wilkinson, a co-editor of the climate anthology “All We Can Save,” about how climate change affects women and girls.

Cotton bags are pretty much everywhere these days. How did an environmental solution become part of the problem?

Milder climate shifts may have shaped the human journey

Until recently, most scientists believed modern humans left Africa in one enormous exodus around 60,000 years ago. But the latest research using a new climate model suggests that modern humans had several windows of opportunity to leave the continent far earlier, and bolsters the theory that Homo sapiens had several migrations out of Africa.

Researchers reconstructed the climate of northeastern Africa over the last 300,00 years and identified when there would have been enough rainfall to allow hunter-gatherers to survive the journey to the Arabian Peninsula.

Among their findings: Sinai Peninsula was crossable as early as 246,000 years ago, and the southern strait had even more favorable windows, including the period 65,000 years ago.

If you’re not getting Climate Fwd: in your inbox, you can sign up here

We’d love your feedback on the newsletter. We read every message, and reply to many! Please email thoughts and suggestions to [email protected].

Further Covid cases in the Vale of Glamorgan