Union GMB announced that some 10,000 of its members, including paramedics, and 999 call handlers will walk off the job on February 6, February 20, and then on March 6 and lastly on March 20.

The action will affect most ambulance services in England and also be held across Wales.

It is the latest blow in the bitter dispute between NHS unions and the Government over  pay, with the Royal College of Nursing (RCM) holding its own strike action today and tomorrow. 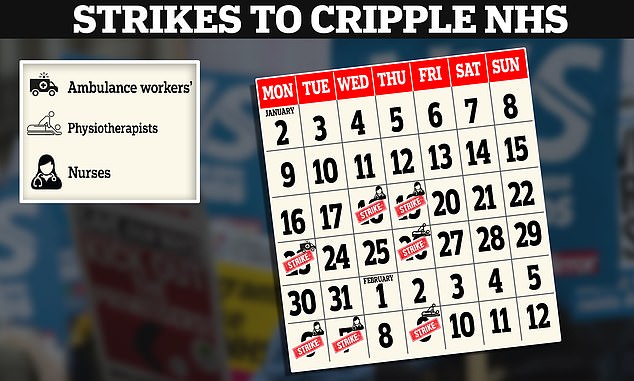 The Royal College of Nursing will hold its strikes over pay today and tomorrow, as well as February 6 and 7. It joins Unison in five ambulance services on January 23. The Chartered Society of Physiotherapy will also stage strike action on January 26 and February 9

Rachel Harrison, GMB national secretary, said: ‘GMB’s ambulance workers are angry. In their own words “they are done”.’

‘Our message to the Government is clear – talk pay now. Ministers have made things worse by demonising the ambulance workers who provided life and limb cover on strike days – playing political games with their scaremongering.

‘The only way to solve this dispute is a proper pay offer.’

‘But it seems the cold, dead hands of Number 10 and 11 Downing Street are stopping this from happening.’

‘GMB ambulance workers are determined, they’re not going to back down,’ she said.

‘It’s up for this Government to get serious on pay. We are waiting.’

Additionally, GMB members the at West Midlands ambulance service will strike on January 23 followed by those at the North West Ambulance Service on January 24. 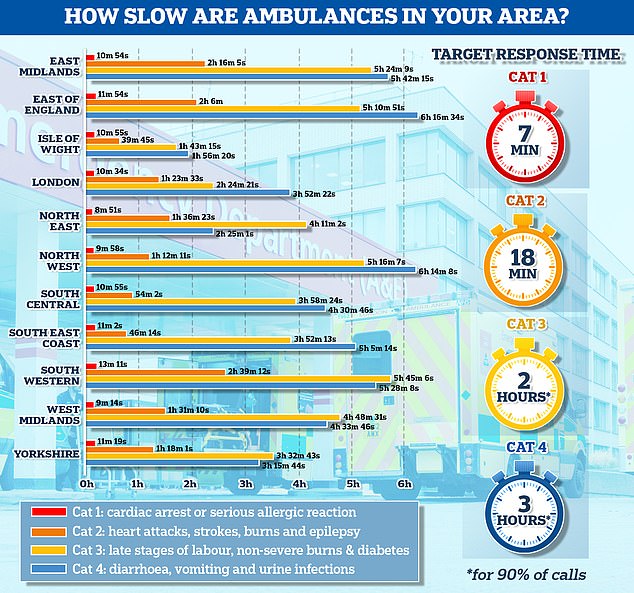 Category One: Where are ambulance response times the worst?

In December 2022, the national average response time for a category one call – for people with life-threatening illnesses or injuries, such as cardiac arrest sufferers – was 10 minutes, 57 seconds.

The average category one response times per region were:

And another NHS union representing ambulance workers, Unite, is due to announce further strike dates today.

GMB’s February 6 strike action also coincides with another round of strikes by the RCN in England and will represents the first time both staff groups have walked off the job on the same day.

As with other strike days, unions are expected to agree to provide cover for the most life threatening emergencies.

The union’s announcement of further strike dates comes after some 25,000 ambulance service members of both GMB and Unison walked off the job on January 11.

Union bosses argue that a pay rise is needed to retain and attract staff to work in NHS ambulance services.

But No10 has accused unions of leaving the public ‘terrified’ an ambulance will not come if needed during the strikes with no nationally agreed standards of the minimum staffing required to keep Britons safe.

‘We understand the strength of feeling among NHS staff and nobody wants these strikes to happen.’

She called for the Government to sit down with unions ‘urgently’ to thrash out a pay settlement.

‘Trusts plan and prepare for industrial action to support staff and do all they can to minimise the impact on patients and day-to-day business,’ she said.

‘But with incredibly high levels of A&E attendances and delays discharging patients from hospital beds, severely hampering overstretched ambulance services, things are likely only to get worse if these strikes go ahead.’ 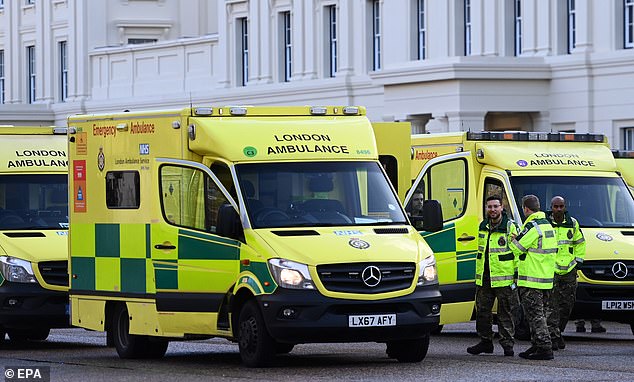 The ongoing dispute between ambulance unions and the Government has seen Armed Forces personnel being called in to drive emergency vehicles. Pictured, army personnel outside Wellington Barracks in London on Wednesday

The dispute began in November when unions voted to strike over the Government’s 4 per cent pay award for NHS staff last year.

GMB has sad it wants a ‘catch-up settlement’ for its members to restore ‘a decade of lost earnings and a retention package that properly rewards existing staff’.

The Government claims that, after receiving a pay rise of at least 4 per cent, most ambulance staff have their average basic pay to £34,300.

Unions, however, say the basic salary for a call handler is no more than £23,000.

The Government’s own website says the starting wage for a paramedic is £25,655.

More experienced medics earn more, however, as is the case for most medical fields.

The ongoing dispute has seen the army called in to drive ambulances on strike days,  as well ministers warning Britons to use ‘common sense’ and avoid risky activities that could result in needing a trip to hospital.

But even without strikes NHS ambulance response times have suffered a dangerous deterioration over the past 12 months.

The latest data, which does include a day of strike action, shows paramedics took over 90m, on average, to arrive at category two calls, which include emergencies like heart attacks and strokes.

This is five times the NHS average target for these types of emergencies of 18 minutes.

But in some the worst-affected parts of the country, such patients were left waiting up to six-and-a-half hours before medics arrived.

Ambulances also took longer than ever to deal with the most life-threatening calls, such as cardiac arrests.

Across England, average response times were nearly 11 minutes — compared to the NHS target of 7minutes.