A Climate Bet Impossible to Lose

Posted on 1 February 2021 by Rob Honeycutt

Ten years ago I was just doing what I often do: following various links and conversations online where people are denying man-made climate change. I ended up on the German website NoTricksZone where I got caught up in a discussion related to climate projections. I made an off-handed comment saying something like, “Why is it those who reject AGW will never put their money where their mouth is and make a bet?” Lo and behold, the owner of NTZ, Pierre Gosslin, sent me an email suggesting that we do just that. And with that, the “Climate Bet for Charity” was born. 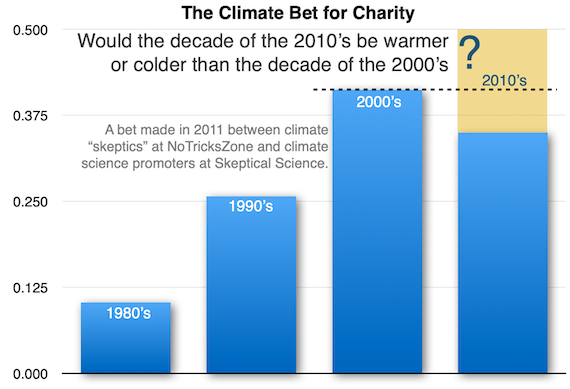 As of January 2021 the bet has concluded. I’m sure no one is in doubt about who won. For that matter, there was never any doubt about which side would win this bet from the start. Someone in New Zealand with the website kiwithinker.com started tracking the data with some interesting adjustments along the way. I also kept my own version of a tracking system that works differently but ends up with the same results. Here, I’m going to lay out the structure of the bet, how the data tracked, why the results are what they are, and where we are moving forward.

The terms of the bet were kept very simple, per a write up by Pierre on the NTZ website:

“If the decade of 2011 – 2020 is cooler or the same on average globally than the decade of 2001 – 2010, then warmist Rob Honeycutt and warmist betters will have to pay to charity the total amount that gets pledged by NTZ and readers betting on a cooler decade.

If the average global temperature for the decade 2011 – 2020 is warmer than the average of 2001 – 2010, then NTZ and coolist readers will have to pay everything they pledged to the charity.”

Of note, in Pierre’s original article describing the bet, he states:

I wonder, will we finally see the true plumage of these folks who deny climate science?

We chose to use an average of two satellite data sets, UAH and RSS. Since we know Roy Spencer and John Christy (who both coincidentally contributed to the recent Trump administration climate denial flyers) run the UAH data this would, in their perception, keep the results honest and agreeable. Pierre agreed to maintain a list of people who pledged to the bet and was expected to notify each person of their obligation to pay up upon the conclusion of the bet.

I’ve learned quite a lot more about global temperature data sets since the start of the bet. Originally, I was under the impression that the satellite data were more accurate than surface station data. Because we had these satellites constantly orbiting the earth taking equal measurements of the whole surface of the planet, I erroneously assumed that they would produce better data. At that time I was unaware of how much processing went into making the data useful, demonstrated by this graph of satellite raw data. 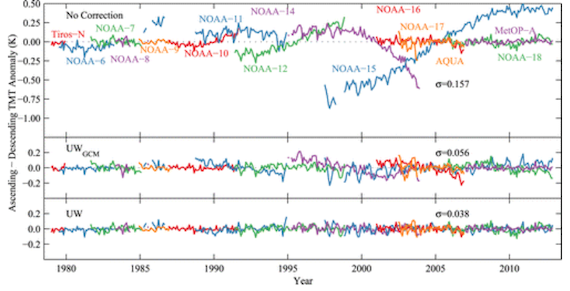 Later, I also learned just how much more uncertainty there is in the satellite data. 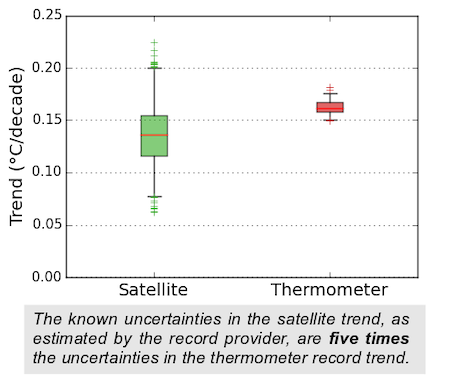 Nonetheless, these were the datasets we agreed to, so we were stuck with them for the coming decade.

Chances of a cooler decade

Pierre and the NTZ crowd’s premise, as best as I understand it, was that warming over the previous five decades was a direct result of ocean cycles rather than the increased radiative forcing from rising CO2 levels. So, the logic goes: After five full decades of this warming cycle, the climate must be ready to shift into a cooling trend. How could it be possible to have a SIXTH decade of ocean driven warming? Right? The NTZ was convinced by all the “logic” ricocheting around the denialsphere. (No need to link and promote any of that tripe here.)

From the side of real climate science the answer was easy. We have a high level of scientific understanding regarding the radiative forcing imposed by CO2. We know human activity is causing atmospheric concentrations to rise primarily through the burning of fossil fuels. It wasn’t a stretch to believe humans would continue to burn fossil fuels for another decade and enough forcing would be imposed on the climate system to cause another decade of warming.

But, could anything else alter the outcome? Large, low latitude volcanic events certainly have a dramatic cooling effect for a couple of years. Over the course of a decade, though? Even that probably wouldn’t be enough. Maybe global nuclear war might cool the planet enough to cause a decade of cooler temps … but then collecting on bets would be the last thing on anyone’s mind.

Long and short is, while we continue to burn fossil fuels, this is a bet that is nearly impossible to lose.

Kiwi Thinker devised a method to track the wager. The only problem I have with the methods is the data to the left side of the graph is relatively meaningless because you’re dividing a small amount of data over an entire decade of time. In the end, the result is the same, but early on it’s not informing you about anything of substance. It does make for a good horse race, and people like that.

It should be acknowledged that over the course of the past decade both datasets have updated their methods and that created about a 0.05°C jump in the data. Interestingly, in the earlier versions of the data the UAH set was the warmer of the two. After their respective updates, the two flipped places and RSS was warmer and UAH made cooler. 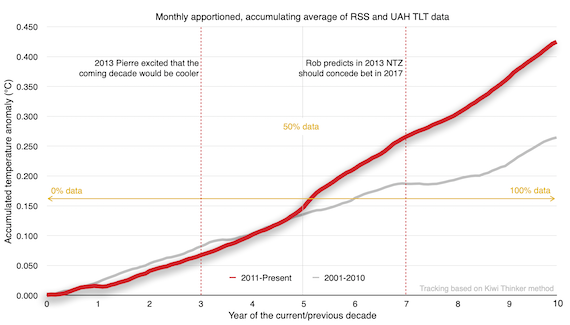 In this recreation of Kiwi Thinker’s graph I mark one particular exchange that I had with Pierre in June of 2013. 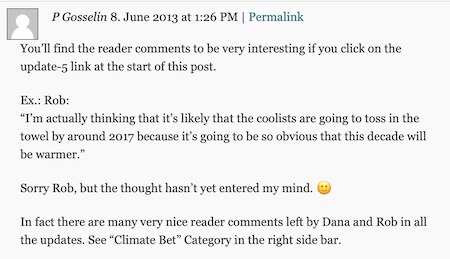 By 2017 the current decade did, in fact, end up beating the previous decade. By that time it should have been obvious to the “coolists” they had lost the bet. Funny how simple predictions can be when you just listen to the science.

I wanted to look at the data differently. My approach was to create a running decadal average in order to see who would win the bet at any point in time. My thinking was, I don’t want these folks to think the result was just a matter of timing, as in, “Meh, if we’d made the bet X years earlier (or later) then the coolists would have won.”

There’s enough data in the satellite sets to show three full decades of a running averages. That means we can look at what would have happened if the bet had been made at any point during the previous decade, as well as seeing who would have won at any point through the course of the bet’s decade. 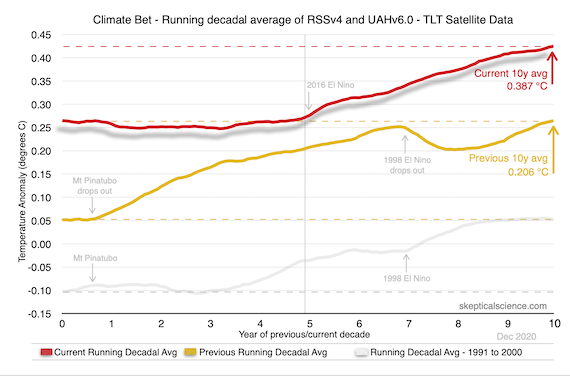 What is abundantly clear is, there is no point in the entire satellite data where the previous decade was cooler. Absolutely nowhere.

The other benefit of my method is, as noted, you can clearly see how different significant events affect the decadal trend. You can see how Mt. Pinatubo caused the decadal trend to go flat for about 3 years. Directly above that, 10 years later, you can see where the data starts to rise again as the Pinatubo years drop out of the average. You can similarly see the reverse effect from the 1998 super El Niño.

Seeing how the Mt. Pinatubo cooling affects the trend, it’s pretty safe to assume it would require at least 2 or 3 very well timed Mt. Pinatubo events to produce a cooler decade. It’s not much of a stretch to believe that’s highly unlikely to occur.

This is not hard to figure out

We have research going back to the 19th century explaining the science. We know our atmosphere has a greenhouse effect that keeps our planet warmer than it otherwise would be. We know most atmospheric gases are transparent to infrared radiation emitted from the surface, and we know that a variety of trace gases are responsible for the greenhouse effect. We can measure the effect. We can reproduce the effect with models. We know why non-condensing greenhouse gases like CO2 have such an important role in controlling our planet’s surface temperature.

We’ve known most of this stuff for a century and a half, and our understanding has only grown deeper over the past 50 years. As we learn more our confidence in what we know only continues to grow stronger.

There is “No Trick” here. Ocean cycles can not produce a hockey stick that oddly turns upward right at the start of the industrial revolution. There is no magic reservoir of heat in the oceans that coincidentally began emerging from the deep. The notion is gobsmackingly absurd.

Where we go from here

I contacted Pierre Gosslin in recent weeks about the bet, but apparently his side gave up and some paid out months ago. The terms of the bet were supposed to be that we’d agree on what charity to pay, but that’s inconsequential. I don’t know for sure that anyone other than Pierre paid. He did create the following list of names for the bet. I’ve asked Pierre if he’s made any attempt to contact these people and let them know they need to pay up. As of this writing, I haven’t received an answer to that question, nor have I been updated on the status of Pierre’s tar and feathering supplies.

I believe most of these folks are going to be too embarrassed to come forward to admit they were wrong. Pierre readily admits they lost, but that’s the extent of it. He also said ocean cycles just ended up favoring our side. Both Dana Nuccitelli and I have offered to re-up the exact same bet again. His side said okay and offered $100. Dana’s suggestion of a larger wager was rebuked. That’s how much confidence these guys have in their position – a hundred bucks.

What are the odds that their “ocean cycles” theory is going to produce a SEVENTH decade of warming? Impossible! The next decade absolutely has to cool. They can’t lose, right?

Of course, from our side it’s easy. We can bet as much as we want because, as long as humanity continues to dump CO2 into the atmosphere this planet of ours is going to keep getting warmer. Back in 2011 when we started this, Pierre made the comment that I seemed like an unusually generous person to bet $5000. I wish I could claim that was my primary motivation. I just knew, with near certainty, that I would never have to pay out that money. The amount was merely a strategic attempt to get them to pay out the most money possible.

Rather than end on that pessimistic note I think it’s important to point out, things are moving in a positive direction on many fronts. The United States is back in the Paris Agreement, run by an administration that views the climate crisis as a top priority. Renewables are continuing to get cheaper and cheaper, to the point they’re falling below extraction costs for fossil fuels sources. Most newly installed electricity generation is now renewable. All the major car companies are shifting production to electric vehicles. That’s just to name a few.

A day is coming when I would lose this same bet thanks to international climate mitigation measures. It’s not likely during my lifetime, but probably in my children’s lifetimes. They’re smart kids, though. I’m sure they’ll listen to the science and know when the bet is no longer impossible to lose.