Story of the Week…

Why call recent disasters ‘natural’ when they really aren’t?

Wildfires, storms, and viruses now are exacerbated by climate change. Perhaps we should call them what they are: disasters of our own making.

At a news conference in mid-August of last year, California’s governor, Gavin Newsom, announced that there were 367 “known” wildfires burning in the state. “I say ‘known’ fires,” Newsom said, “but the prospect of that number going up is very real.” A couple of days later the number did, in fact, increase, to 560. A few weeks after that, many of the blazes were still burning, and one—the Doe fire, north of Santa Rosa—had grown into the largest conflagration in California history. The smoke from the state was so bad that it veiled the sun in New England. By the time most of California’s flames had been put out in late November, at least 31 people had been killed and tens of thousands evacuated.

Even as more than 15,000 firefighters were battling the California wildfires, Hurricane Laura was bearing down on Louisiana. As it passed over the Gulf of Mexico, it strengthened at a near-record rate. In just 24 hours it zoomed from a Category 1 to a Category 4 storm. By the time it hit Cameron Parish, early in the morning of August 27, it was the fifth fiercest hurricane to make landfall in U.S. history. The storm caused at least 16 U.S. deaths and up to $12 billion in damages.

Twenty years ago, crises like the Doe fire and Hurricane Laura could have been described as “natural disasters.” Thanks to climate change, this is no longer the case. Right around the time of Newsom’s press conference, the mercury in Death Valley hit 130°F, the highest temperature ever reliably recorded on Earth. A hotter, drier California is much more likely to burst into flames. The Gulf too is heating up, with dangerous consequences. Hurricanes draw their energy from the warmth of the surface waters and so are becoming stronger and more apt to intensify. I’ve been reporting on climate change for almost two decades, and I’ve come to think that we need a new term to describe these events. Perhaps we should call them “man-made natural disasters.”

Editorial of the Week…

President Biden’s raft of executive actions put the US on a better path to lead the world, but legislation is still necessary.

President Biden came out swinging on climate change in his first two weeks in office. In a series of executive actions, he ensured the United States would rejoin the 2015 Paris climate accord, freeze new oil and gas leases on federal lands, invest in environmental justice programs, purchase American-made zero-emissions vehicles and clean sources of power, and impose rigorous standards for the buildings and infrastructure it funds in flood zones. But if the country is to meet the ambitious targets the new president has set to slash planet-warming emissions — and regain the credibility to nudge other nations to do the same — a dysfunctional Congress still needs to step up.

Biden campaigned on an agenda to make the electricity sector free of carbon emissions by 2035 and to bring the US economy to net-zero greenhouse gas emissions — absorbing through farms, forests, and technology as much as it pollutes — by 2050. Meeting those targets, and using the leverage it gives the United States to persuade other countries to do the same, is nothing short of a necessity if the world hopes to prevent economic and humanitarian catastrophe. But it’s also a tall order for an economy that still heavily relies on oil, coal, and natural gas.

Toon of the Week… 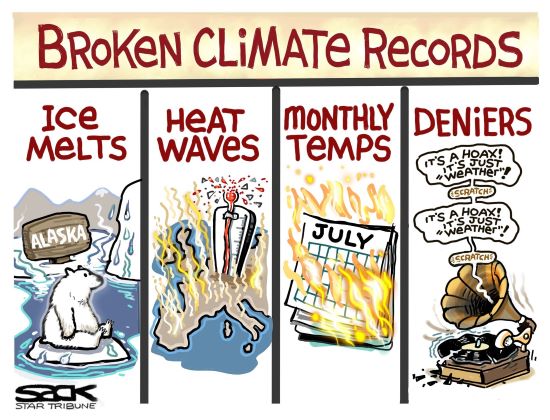 CLAIM: “The 58 year net gain of global temperature is zero. We are simply in a cyclical, normal ebb and flow of temperature.”

KEY TAKE AWAY: Clear global warming trends of Earth’s ocean, land, lower and atmosphere have been observed over the past 58 years as well as over longer time periods. Radiosondes are instruments used by NOAA to collect temperature data in Earth’s troposphere, the lowest region of the atmosphere that extends from the surface to about 6 miles high. Radiosonde and satellite data from 1958 to 2019 demonstrate global warming in the lower troposphere.

Poster of the Week… 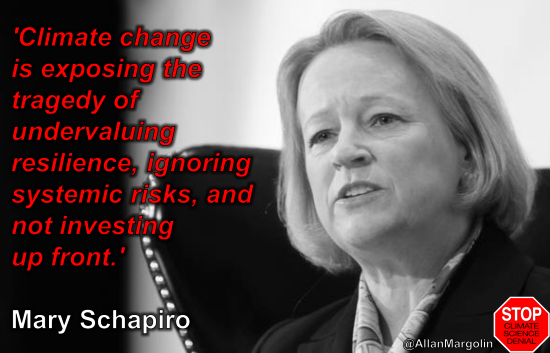 Mary Lovelace Schapiro served as the 29th Chair of the U.S. Securities and Exchange Commission. She was appointed by President Barack Obama, unanimously confirmed by the U.S. Senate, and assumed the Chairship on January 27, 2009. She is the first woman to be the permanent Chair of the SEC. Wikipedia

Australia’s electric vehicle policy steers us to a future based on fossil fuels. It needs to be dumped | Electric, hybrid and low-emission cars